In the nearly twenty years between 1996 and 2015, there were 7,056 disasters recorded worldwide, which is double the number of disasters that happened during the previous two decades from 1976-1995. According to the infographic by the Aid & International Development Forum (AIDF), 91% of these disasters were attributable to climate or weather-related events. This also coincides with the dramatic increase in annual average temperatures marking previous decades. This trend has resulted in 2015 being the hottest year on record during the twenty years evaluated. As a result of high global temperatures, twice as many major droughts occurred during 2015 in comparison to the annual average of 16 between the period of 2006 and 2015. To view the full infographic, click above. 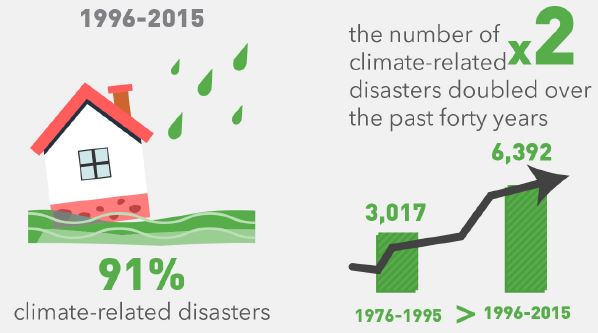 Between 1995 and 2015, floods have affected the largest number of people, negatively impacting the lives of 2.3 billion. During the same time period, drought affected another 1.1 billion people. Storms, similarly, affected 16% of the world.

The year 2016 saw 11,000 people around the world killed by disasters. The deadliest of which being Hurricane Matthew. The event claimed the lives of more than 700 people, the majority of whom from Haiti.

Storms in general, including hurricanes, cyclones, and tsunamis, have been found to have the most negative impact on residents of this planet. Between 1995 and 2015, almost 242,000 people lost their lives to one of the 2,018 storms recorded. However, storms come second in frequency right after floods, which have occurred at an increased rate of about 34% and now threaten 1 billion people around the world. In South America in particular, annual floods now affect an average of 2.2 million people per year.

In 2015 alone, a total of 346 disasters were reported, with the majority taking place in Asia and the Americas. The United States faces a variety of disasters every year, especially as global temperatures increase. Wildfires are amongst the most frequent ones, 38 of which escalated to the point of disaster since 1995. These fires have affected 108,000 people in the country and caused $11 billion USD in damage.

Around the world, a large percentage of the population is exposed to various types of natural hazards.

One in three people are exposed to earthquakes globally and 414 million people are currently residing near to one of the 220 most dangerous volcanoes.

There are also a good number of major cities with large populations which are threatened by natural catastrophes due to their geographic location and climate. Tokyo (Japan) was found to be the city most exposed to natural disasters, with Jakarta (Indonesia) and Manila (the Philippines) coming in second and third place respectively. The risk of disaster in certain regions can also potentially increase as climate change becomes more prevalent.  Accounting for the continuing effects of climate change, Honduras stands to face twice the potential for catastrophe while Trinidad and Tobago’s risk increases by fivefold.

The infographic was created in light of the 9th annual Global Disaster Relief and Development Summit, taking place on September 6-7 at the Ronald Reagan Building and International Trade Centre in Washington D.C. The Summit will gather 350+ decision makers from government and UN agencies, NGOs and the private sector who will be exchanging knowledge, sharing best practice and discovering innovations that help improve disaster preparedness and proactive mitigation. Expert speakers include:

Take a look at the first part of the infographic: Disasters & Climate Change: Internally Displaced People and Refugees

Be part of the humanitarian aid and development community!

Register now to receive AIDF's newsletter with insights into latest trends, innovations and best practice in the humanitarian and development sectors